Velin is a young international brand that combines several projects at the intersection of media and fashion. It is an online magazine devoted to current events in the fashion industry and contemporary culture and at the same time a multi-brand online boutique, where you can find and order iconic pieces by designers you've just read about in the magazine's feed. The Velin team also plans to publish an annual limited edition fashion almanac featuring the season's most interesting finds.

Velin's mission is to tell about the fashion industry in an expert, but accessible way. To talk about trends, offering our own vision of what is important. In our work with the brand, we also had to feel and catch this balance, and then find the means to express it visually. 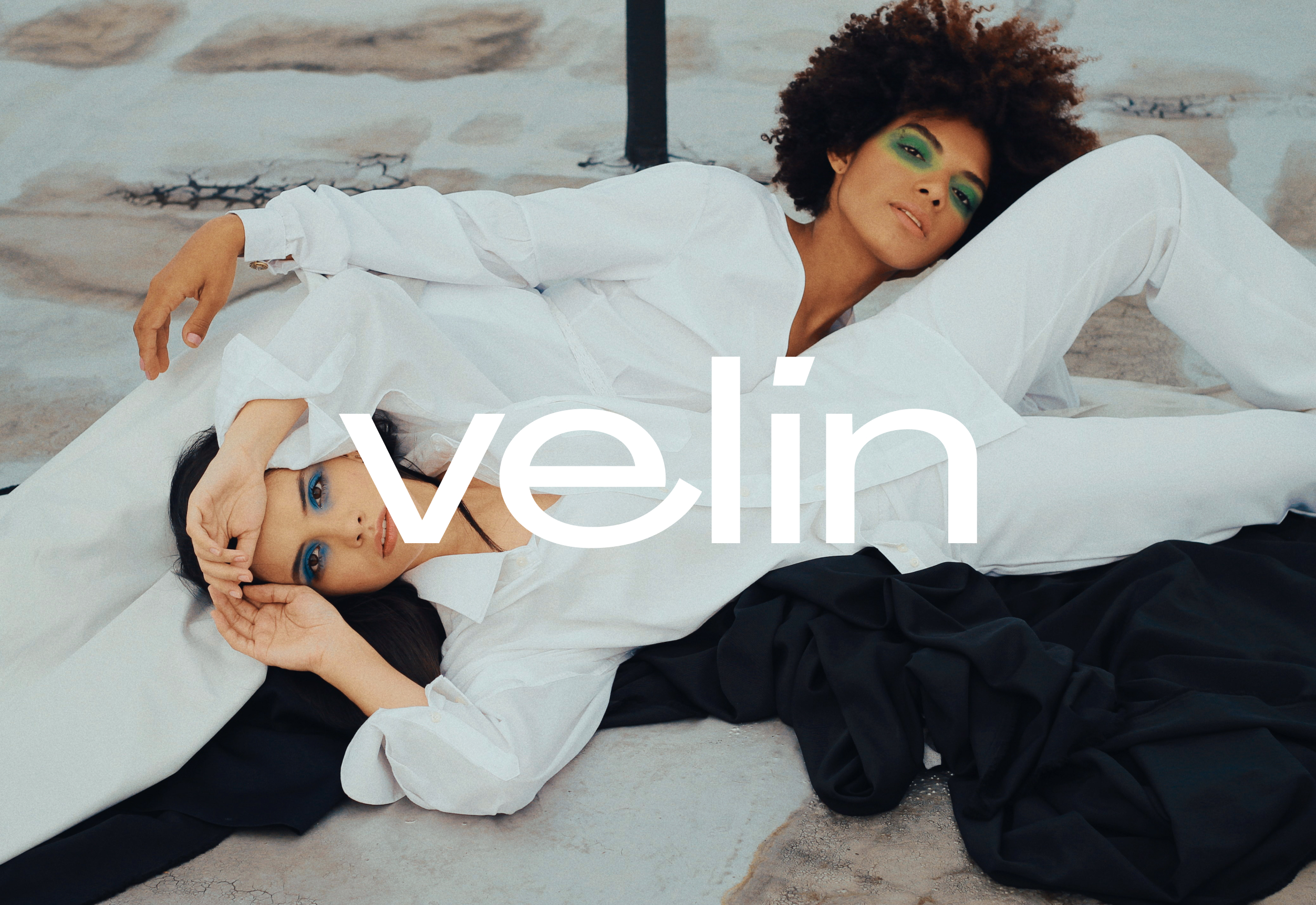 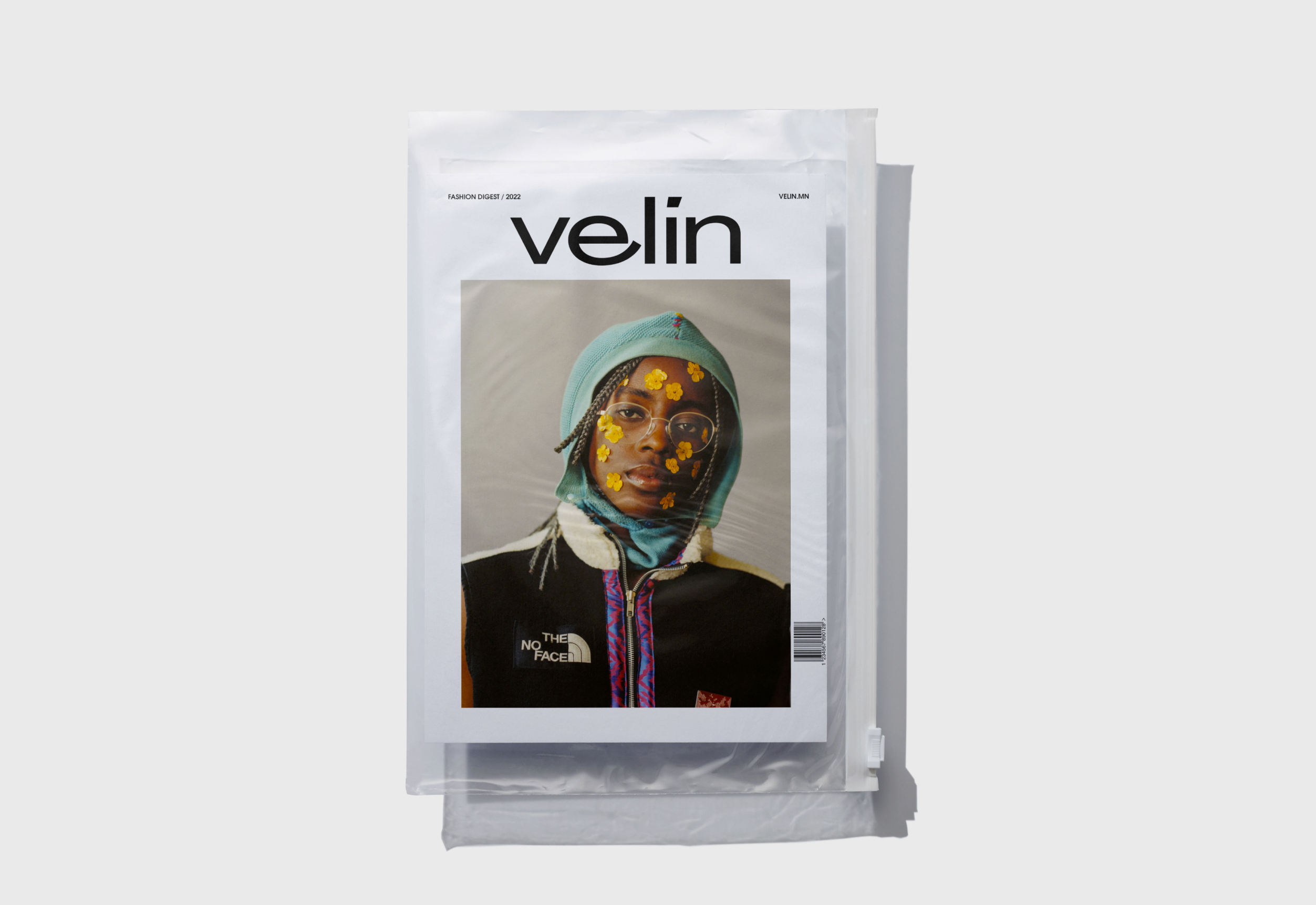 The first step was the development of the logo. The search for a visual solution that would reflect the character of the brand and mark it as a representative of the international fashion environment led us to the idea of developing an original grotesque font.

The use of simplified grotesque logos, in general, is characteristic of fashion brands - even industry giants are increasingly resorting to this technique, abandoning the more complex traditional graphic symbols. On the one hand, this is a reflection of the general trend for brevity in design, which was born on the wave of universal digitalization. On the other hand, simplification solves an important symbolic problem, securing the new status of the brand: it is recognized not so much by its logo as by its unique aesthetic.

Although Velin's story is still just beginning, aesthetics and the ability to broadcast their original vision are also core values for them, and online is the main space for realization. So it was the concise typography of the name that we saw as a key element of the brand's identity. 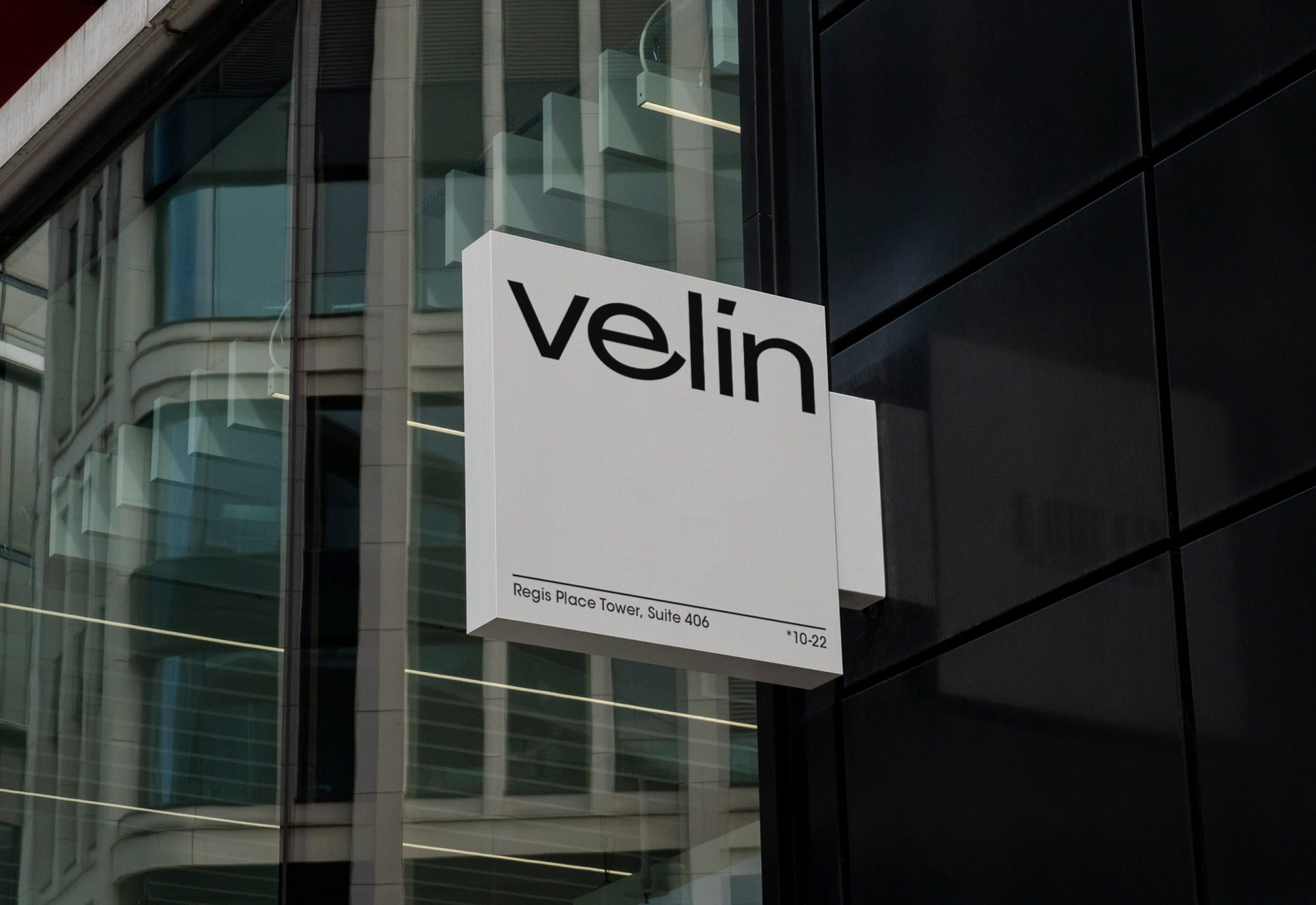 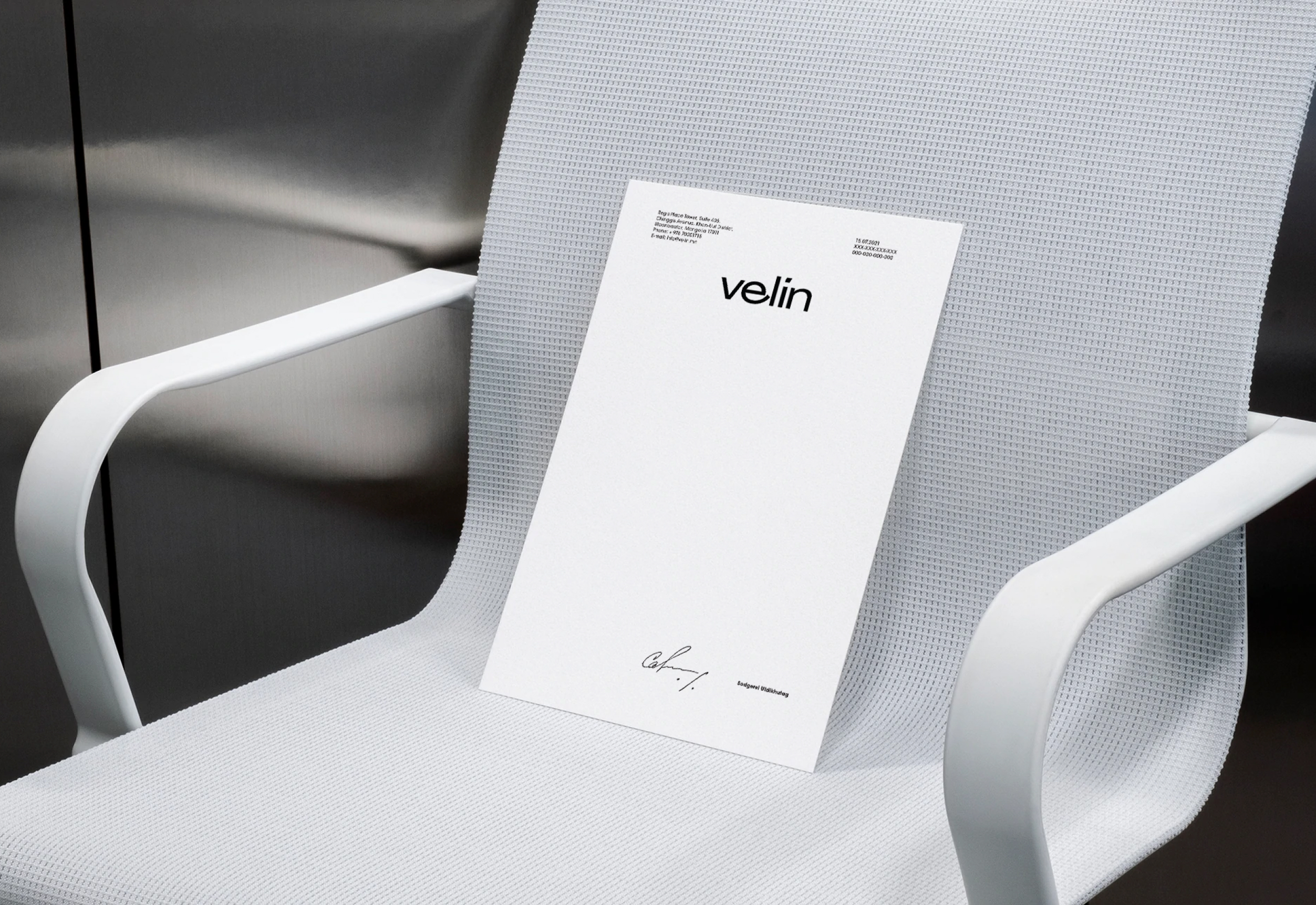 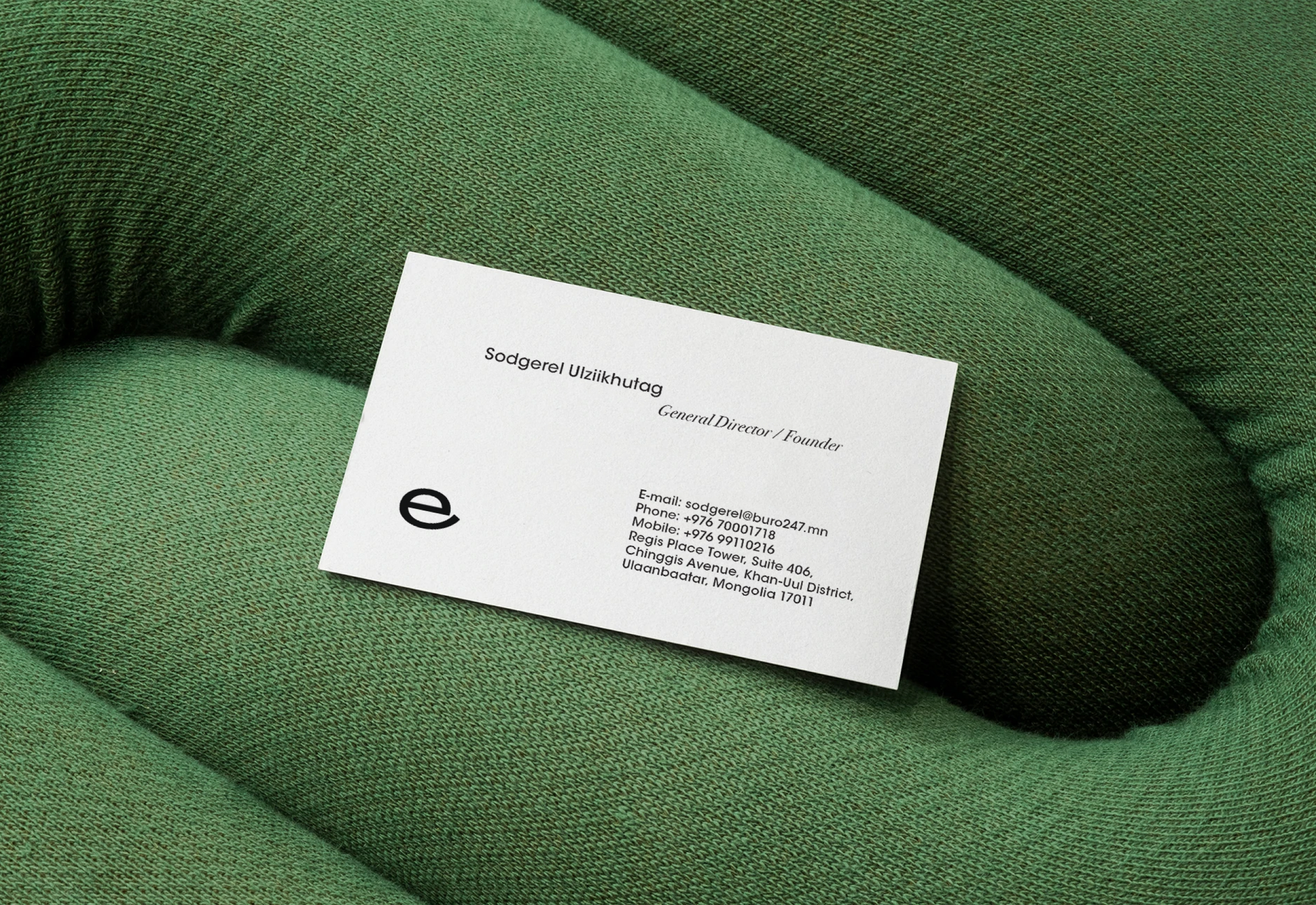 It is said that the most correct ideas come while working. We have seen this firsthand. In the process of developing the font for Velin, we realized that we wanted to go further and add a characteristic element to the original grotesque typeface, which would be meaningful and recognizable on its own.

So the accent letter "e" with an elongated ponytail appeared in the logo. It works both as a detail that draws the eye to the logo and as an icon or graphic symbol of the brand. The Velin team even used this mark to create white gold pins as a gift to employees.

This laconic touch allowed us, on the one hand, to stay within the trend for minimalism, and on the other hand, to add personality to a simple font logo. Most importantly, this decision helped us visually reflect one of the key values of Velin, a brand that seeks a balance between being the mouthpiece of the fashion industry and the desire to broadcast its distinctive vision of fashion. 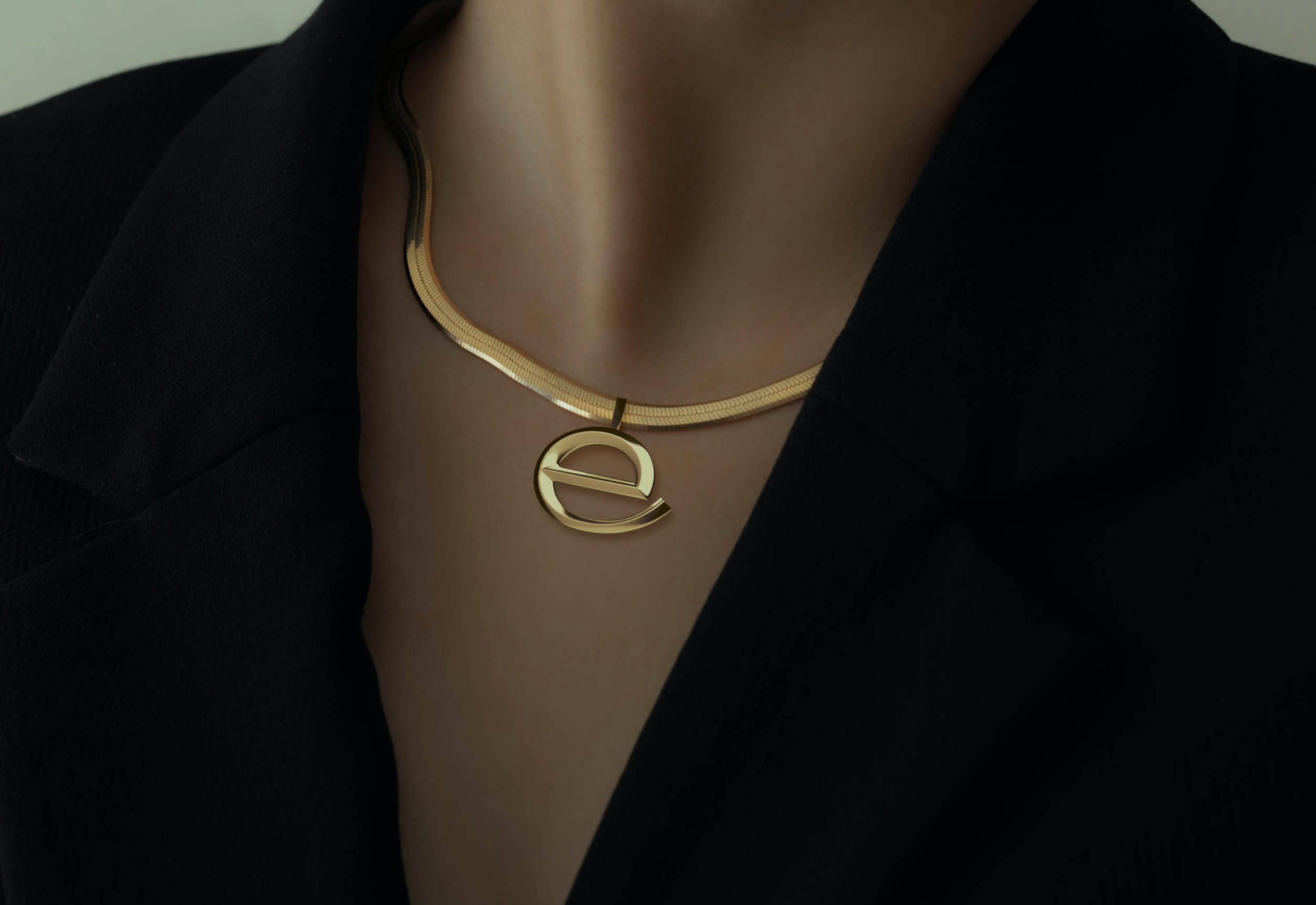 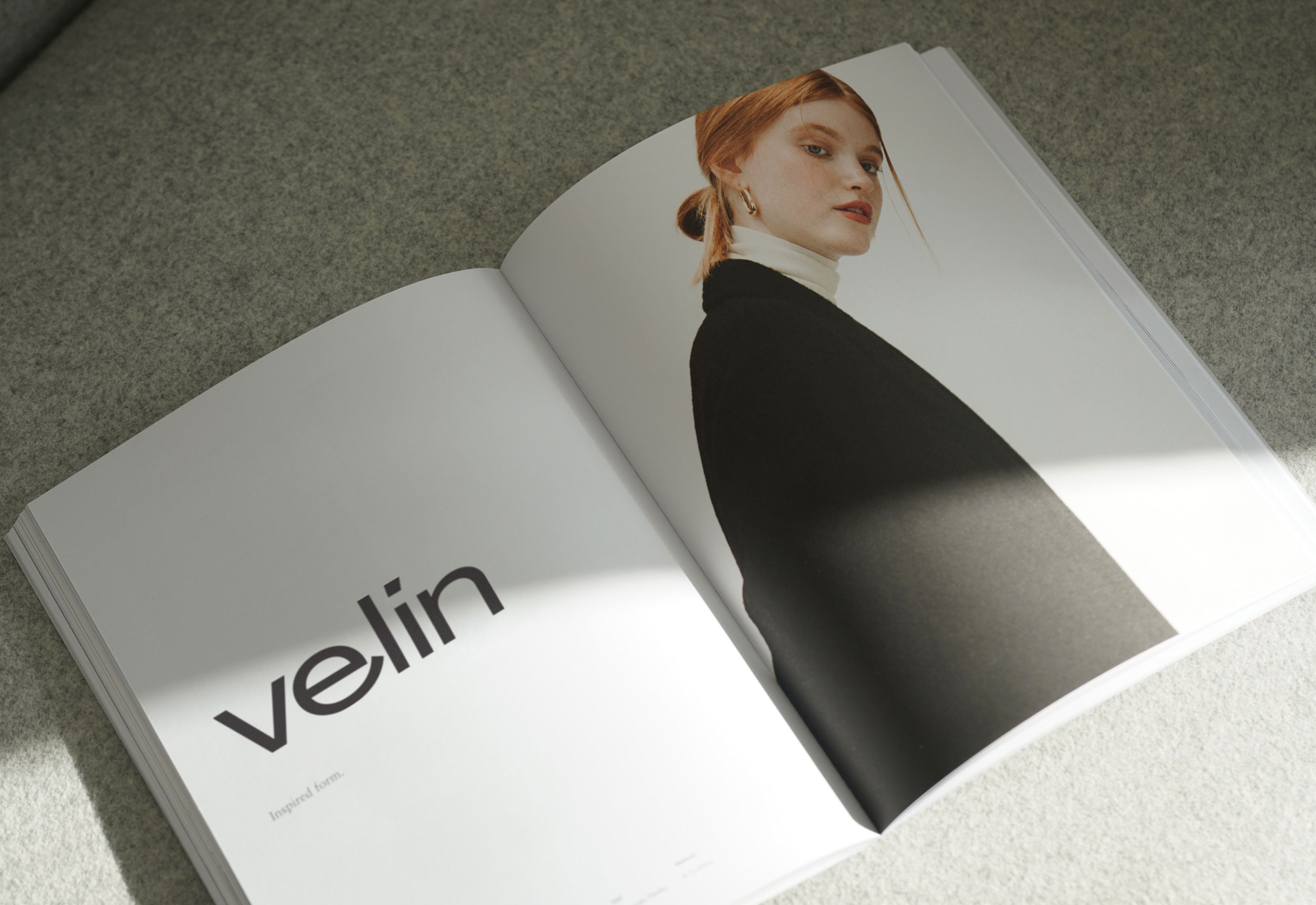 In addition to the logo and font, we designed other corporate identity elements for Velin, including a concise color scheme and the selection of a suitable font pair for the site. The guidebook we designed for the client is focused on digital formats and, among other things, includes a design concept for the brand's website.

When creating it, as well as when working on the corporate identity Velin, we took a minimalistic approach. Simple and clear, not overloaded with details interface, soft color scheme with a gradient - our task was to design an online space, which functionally serves as a kind of passport for photos from lookbooks of fashion brands, and at the same time emotionally perceived as an independent fashion-platform. 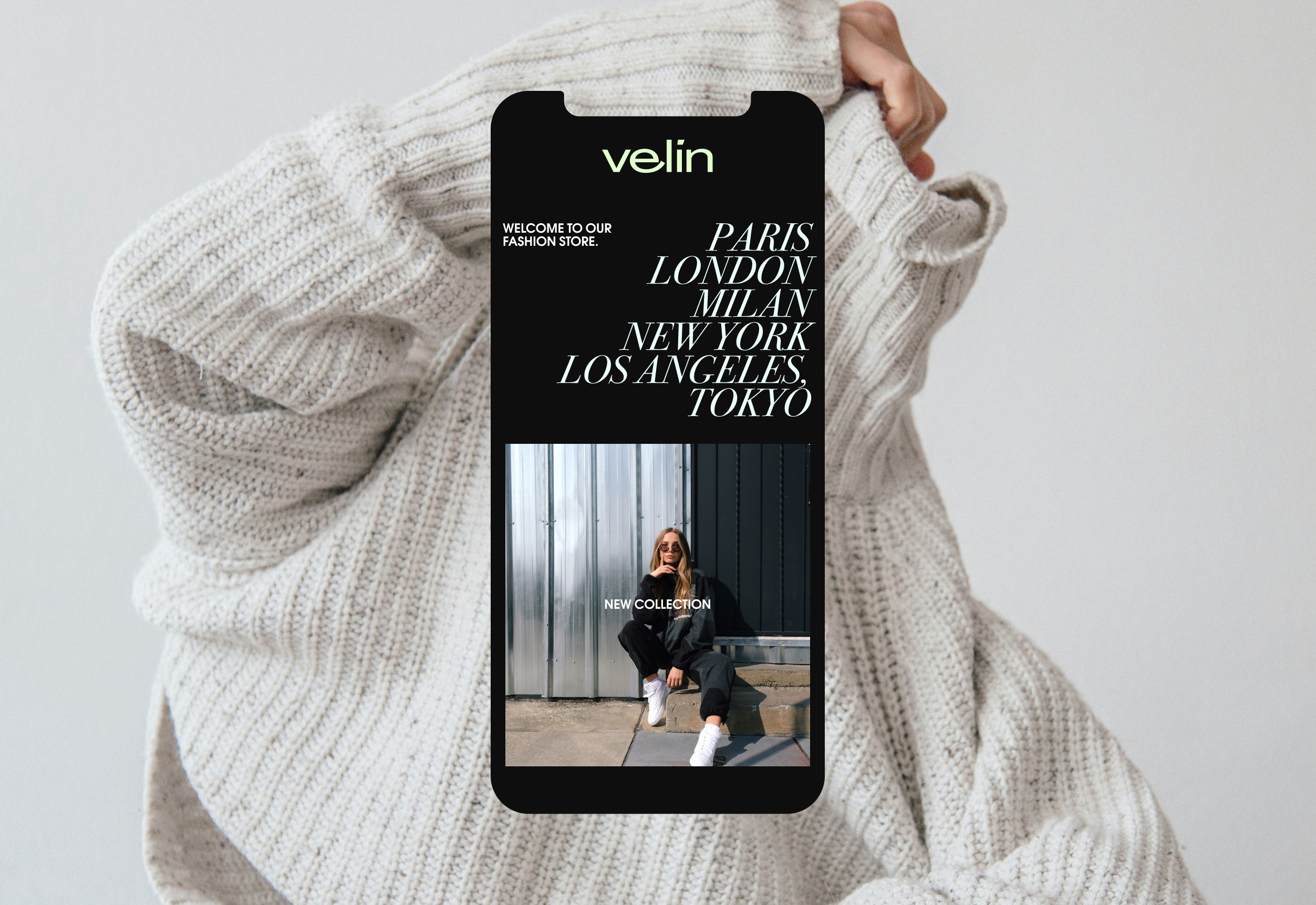 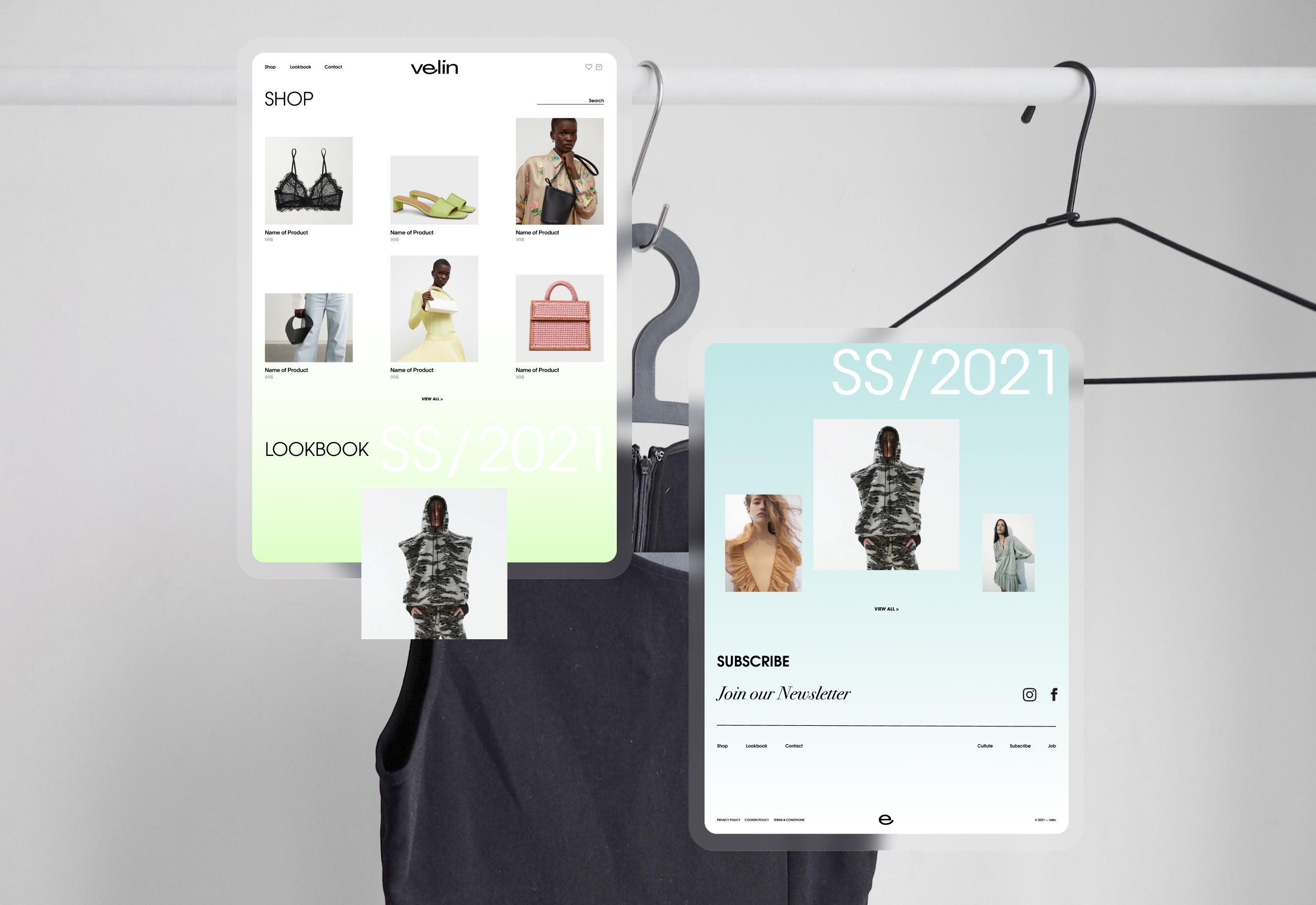 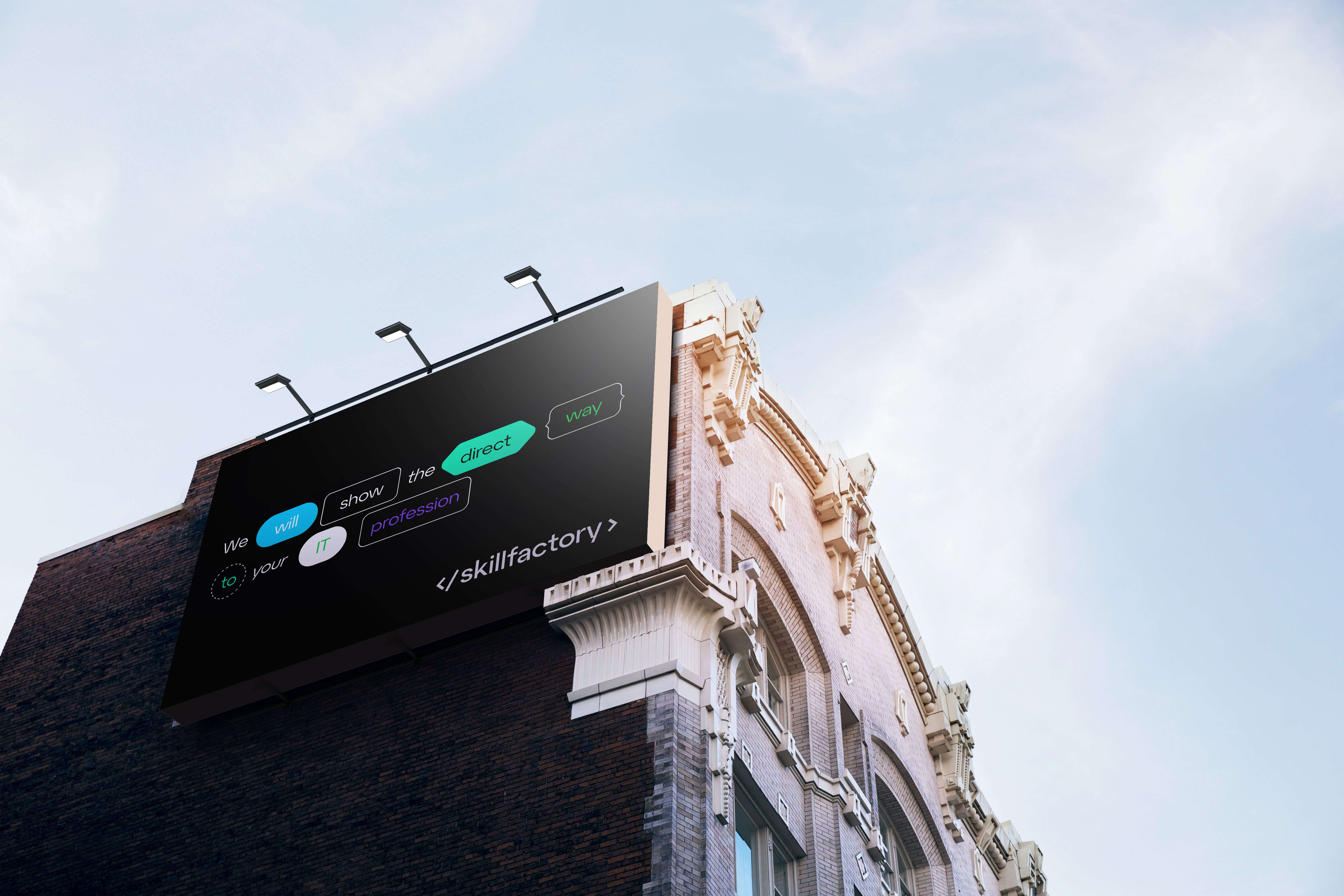